I was thinking, it would be good to also write some informations about Septuagint - old testament in greek, it's origin and meaning in present times. Therefore if you find this topic at least a bit interesting, carry on reading...

As a base for a present translation of the old testament in the Bibles, is usually accepted hebrew masoretic text. According to the fact, that the original old testament was written in hebrew (and some parts in aramaic), it is surely, at the first glance the right thing to do. The problem is, that the preserved scrolls of hebrew old testament (from which the Old Testament translates today) are dated in a year about 1000 b.c.e.

Septuagint, the old testament translated from the hebrew original to greek some time in 3rd century b.c. at the request of the king Ptolemaios II., was preserved in a complete form in scrolls dated mostly from 4th and 5th century b.c.e. Smaller parts of Septuagint, that were found, are actually significantly older.

According to the Letter of Aristeas, is Septuagint result of the translation of 72 jewish wise men - and that's why is Septuagint usually marked in a simple way with a short cut LXX (Roman text of number 70).

Among hebrew masoretic text of the old testament and Septuagint, are at some places important differences. It used to be thought, that the Septuagint is not very well executed translation into greek language, but in 20th century a scrolls have been found in Qumran confirming, that it's a correct translation of a different hebrew text.

In the new testament we can see, that Jesus's followers knew and used Septuagint. For example Stephen told, that Jacob and his relatives were 75 souls altogether (Acts 7,14). This information comes from Septuagint (or perhaps from aramaic Peshitta), but not from hebrew texts. In the hebrew text is written, that there were 70 of those people. (Genesis 46, 27).

From various preserved parts of Septuagint, which are dated till the 1st century b.c., till roughly to the 2nd century b.c.e., we can see, that the God's name is being used in them. This is the commonly known tetragrammaton JHWH. There are fragments preserved, where is God's name JHWH, written in the greek text by either fenic (or actually aramaic letters), protohebrew or by a classic hebrew quadratic letters. It is obvious, that during Jesus's times, God's name was known and used, and it was only since some second half of the 2nd century b.c.e. and later, started to be replaced by the expression "THEOS" - θεὸς - (God) or "KYRIOS" - κύριος - (Lord). On the second picture you can see the example of comparisons of the Septuagint from the 1st century b.c.e., and on the same place from the 4th century's later Alexander's Codex (here is God's name replaced with the shortcut KY and KC (read KS) shortcut for κύριος (kyrios) – Lord. 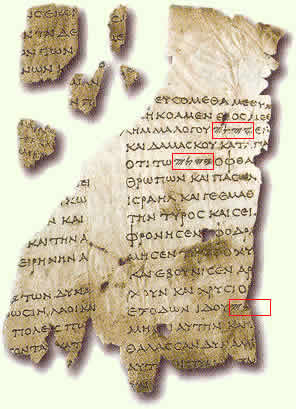 Septuagint was having an important role in a life of the church, and has an important role also in present times. While for the western church is the main text of the old testament the hebrew text, for the east churches (orthodox), is the main source the greek Septuagint. Some churches today are including in the Bible some extra Books of Septuagint (for example – catholic church is adding them as the deutero-canonical books).

For those who are interested in Septuagint, I prepared some versions of the Septuagint in my Study online bible program (www.obohu.cz/bible). Version with and without accents, version based on the work of Alfred Ralfhs (including accents, deutero-canonical and apocryphal book) and Analytic Septuagint – version without accents, marked by Strong numbers (with a connection to the Czech, Russian, English, Spanish, German and French dictionary) and morphology (Czech, Slovakian, German, English, Polish, Spanish and French). Thanks to this, can also someone without the exact knowledge of Koine greek find out, what is in Septuagint written.

I already mentioned about the pratices of replacing God's name by the expression κυριος (kyrios), which in translation means "lord, ruler". The result of this now looks really bad. The newer preserved versions of Septuagint are now completely without God's name, and therefore in (incomplete) Analytic Septuagint you'll find the word κυριος (kyrios - lord, ruler) 7380 times. Simply said, in Septuagint is now thousands of lord's, and the text sometimes looks like it was written by someone suffering from Alzheimer's. Tenths of places of type "λεγει κυριος κυριος" (says Lord, Lord). "κυριε κυριε"(Lord, Lord) etc. are only a small example, of what damage this replacing caused. In present version you hardly recognize, who is actually speaking, or whom is the text concerning, and it's common, that the κυριος appears as much as 4 times in one verse.

When translating Septuagint, I lost my patience with this offensive and stupid move of replacing God's name, and I edited the Analytic version of Septuagint – I put the tetragrammaton of God's name "יהוה" back into it, into places according to the hebrew scriptures.

That work is not perfect, (and also cannot be) but I tried to do the least mistakes possible. It should've been for about 6000 times less of them, than in the version with "κυριος" :-). I did not alter the text of Septuagint itself, I only put God's name into places where it was possible. Septuagint is a translation of older and a little different hebrew texts, compared to what we use nowadays. Some places are translated more simply, in some places is for example instead of hebrew "Lord JHWH" only one "κυριος" :-), in other places is instead of God's name "θεος"(theos – God) etc.

In my Study online Bible program (SOB) you can now also find Analytic Septuagint with God's name "יהוה" (with Strong numbers and morphology) - version without accents and also version with accents!

I hope you find this correction of Septuagint helpful, and that you'll forgive me some possible mistakes I could've done along the way.

What do you think?